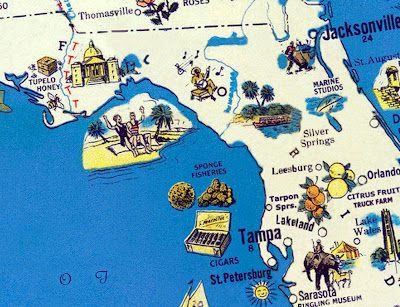 Holy cow, I can’t believe that we’ve been gone for two weeks and haven’t posted anything yet! For those of you arriving late in the story, Leah and I left on January 2nd to head South for a month - with no plan - and have landed in Little Talbot Island State Park outside of Jacksonville, Florida.

This is our first time taking a super-sized vacation with the Alligator Teardrop; our longest trip to date was ten days in Maine this past September. It’s not our first time traveling for a month together, however. We took a VW bus out West twelve years ago. And while that trip was adventurous, it was no vacation. The bus was an electrical and mechanical failure waiting to happen, and was the catalyst to the now-infamous “chardonnay incident,” as well as the “lose-all-power-including-windshield-wipers-and-headlights-at-dusk-in-a-snowstorm-on-a-deserted-road-near-Vale incident.” Fortunately, that trip bears no resemblance to our current one.

The day we left Trumansburg, NY, the temperatures at home dipped to 5 degrees, reinforcing our decision to head to Florida. Our first night was spent in a hotel in Richmond, Virginia, and our second night in a dear friend’s guest cottage in Greenville, North Carolina, where the lows reached 17 degrees. (While we think we might have stayed warm enough in the Teardrop, getting up to pee in the middle of the night would have led to potentially dangerous fanny freezing.)

That’s the only thing I miss: indoor plumbing. Living in a five-by-six box with my lovey has been remarkably easy, with the huge outdoors as our living room. And we’ve had no rain, though two days that barely topped 50 degrees led to some cranky moments, which were appeased by visits to the local bar to watch the playoffs.

On the way here, we sent a few nights in the Teardrop at Skidaway Island (now affectionately known as Skidmark Island) State Park in Savannah, Georgia. Saw lots of bald eagles and even some alligators. We decided to skip Jekyll Island (too many people) and Cumberland Island (dogs not allowed). We also decided to not go much farther South, since parks get more crowded as the weather gets more tropical. In fact, a couple of our lovely campground neighbors said that even six months out, they couldn’t get a reservation in any state park in the Keys.

So Jacksonville it is. We will be allowed to stay at Little Talbot for two weeks (we’re one week in now) and then we’ll have to relocate for two nights minimum. Where we head next is a mystery waiting to be solved, though I hear the manatees have gone inland to the warm springs, and we may follow them.

Overall, Little Talbot has been sweet with biking and hiking and miles and miles of empty wilderness beach to ourselves. The campground is a short walk from the beach, and the campsite is on a salty tributary that at low tide is a restaurant for wood storks, osprey, egrets, and pelicans. There was a loud influx of people this holiday weekend – the nerve!- but we survived with the help of a new cocktail creation by Leah (“The Southern Migration”) using ingredients from a roadside fruit stand. You can visit our cocktail blog for the yummy (and funny) story at www.feliciaspeakeasy.com

How does one fill one’s days when camping for a month (besides imbibing tasty cocktails)? That, dear readers, will be the subject of my next post. Stay tuned.