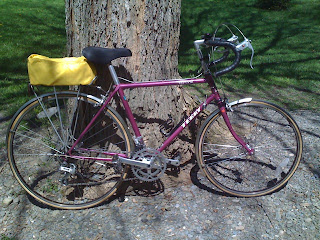 When I'm camping, one of my best friends is a bicycle. I rode more on this trip than I did the last two years in T-burg. I rode to the bathroom, to the beach, to the Tiki bar, to get ice, to get firewood, to explore, on the beach. I just rode. Loved it!

Unfortunately, I had the most horrendous seat on my bike for the trip. I had so much tailbone pain and pressure that I actually needed a good minute hobbled over my bike after I dismounted before I could walk. When your tailbone feels likes it's going to explode, standing is not so much fun.

The bike is an early 90's Terry Classic, and the seat was an old, somewhat wide, gel seat with no relief cut outs for my precious little tailbone. Seats have changed a lot since the 90's.

After two and half weeks of utter pain, Amelia and I biked around St. Augustine to check out the handful of bike shops for a seat. I ended up getting a seat at Island Bicycle in St. Augustine that literally saved my ass. It's a Unity saddle from Giant, and it has three different widths - hooray! Because, guess what, our asses are not universally sized.

Thank you Island Bicycle! It was the friendliest shop we visited. We were ignored in all the other shops. I understand hating on tourists. I get it. I grew up in the Berkshires. But business is business. Suck it up, fake it if you have to, or do something else. Tourists will buy things elsewhere. We did.

The bike is an early 90's Terry Classic I bought 2 years ago from a great used bike store in Rochester, NY, R Community Bikes. If you are anywhere near Rochester, and you need a bike, a part, or just like bikes, go there (ask for Fred, he's awesome). Well worth the trip. It's much more than a used bike store.