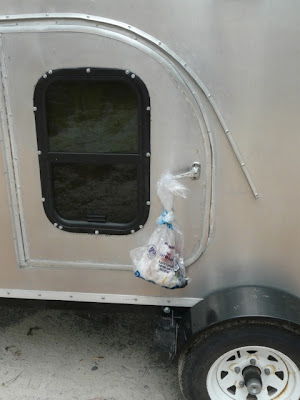 I noticed that most campers produced a full bag of trash - every day. I find that to be unacceptable and lazy. Lazy is one of my pet peeves. I tend to lump a lot of things into the "lazy" category.

Not only that, some campers just threw away everything: redeemables, recyclables, wet sleeping bags, 'disposable' items. It's like magic! It just disappears when you throw it in a dumpster! Poof!

There is no excuse. You are your trash, consider it a mirror.

-Leah
Posted by Unknown at 1:08 PM No comments: 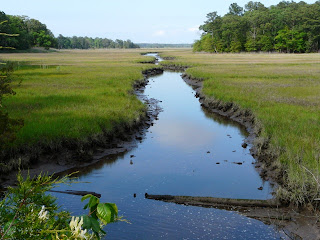 We bicycled on the Junction and Breakwater Trail while in Lewes. Round trip was about 18 miles from Cape Henlopen State Park.

It's a really nice trail. One leg of it is still being finished, but it's tightly crushed gravel and easily ridden on even with skinny tires.

Directions on how to get there were a bit sketchy. No one really knew where it started. We picked it up right after the High School on Route 9 at a traffic light.

Dewey Beach is one of the ONLY beaches on the East coast that allow dogs to run free, without a leash. I have to say that I completely understand why dogs are not allowed on beaches.

During the Summer dogs are allowed on the beach after 5:30, that's about the only restriction. 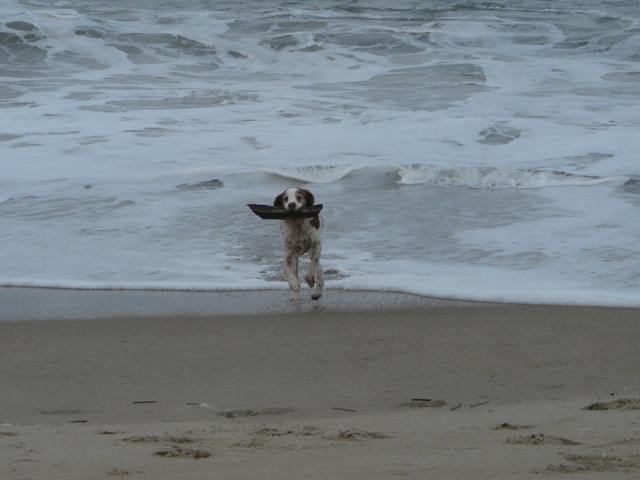 A one time fee of $15 and your pooch can romp on the beach. Money well spent for our little water lover.

But, please, pick up your dogs poop, don't be "that" person.  There's no excuse, poop bags are right there next to the trash can.

Our first night was lovely, peace and absolute quiet except for the Chuck-will's-widow at dusk. I've never actually seen one of these birds, but their call is unmistakable.

Afternoon number two arrived with the sounds of four teen-age boys setting up camp right behind us. Oh. No. Here. We. Go.

They came over and told us that if it got "too loud" to just let them know. Oh, how nice. Amelia told them if they're warning us about being loud, maybe they should find another site. I generally just scare people with silence. Why does silence scare people? I don't know, but it works. Sometimes. They stayed next to us.

At three a.m. the little rodents were still wide awake, guzzling Natural Light beer, breaking tree limbs down, running around shirtless with torch-like objects, and hurling themselves repeatedly into something trying to break it. Four words came to mind for me: Lord of the Flies. It's all fun and games until Piggy is dead. 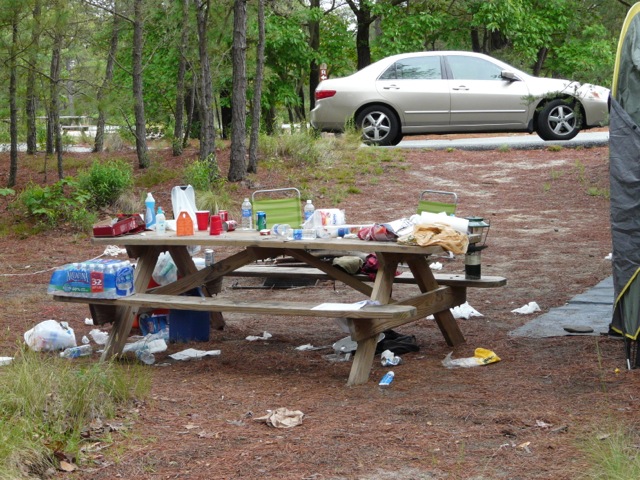 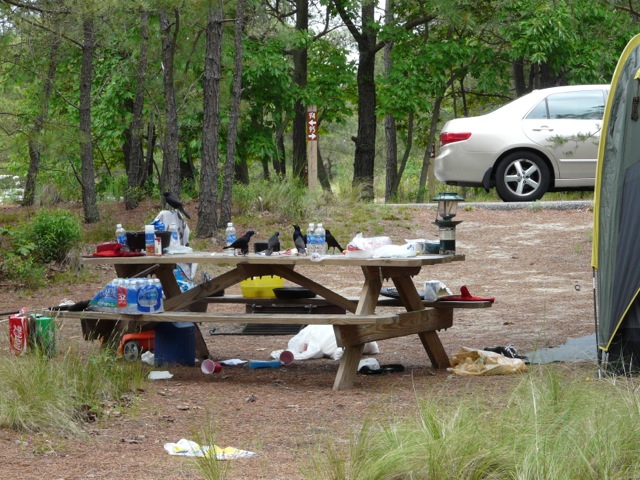 With the Conch nowhere to be found, the Crows and Grackles declare war over the carnage.

There's always a silver lining.  Most people, regardless of age, can't party like that every night. There is an ancient camping proverb, "Hangovers make night two a quiet and early one."

In the morning, Amelia let them know that yes, you were loud and obnoxious, and no, we aren't here to police you, you need to police yourselves.

As fate would have at, at 11:00 that night, they packed up in the dark and left.  Good-bye Jack, good-bye Roger, good-bye Beast, good-bye Conch. And R.I.P. Piggy. 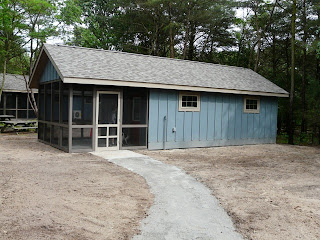 Amelia and Eesah went to investigate the new cabins at Cape Henlopen State Park. Looks like they'll be ready for Memorial Day week-end.

No water or bathroom, just a kitchen/dining room, and living/sleeping room. Each one has air conditioning though, which you're going to need very soon.

On our way back home a friend suggested we check out Helen's Sausage House. Amelia has a slew of face swelling allergies so she couldn't eat any sausage. She had chicken salad, while it wasn't exciting, it didn't kill her or make her face swell up.

I had the sausage, egg and cheese sandwich. It was HUGE. It was really cheap, under eight dollars for both of our sandwiches. But, I have to admit, I expected something better. The sausages were filled with several preservatives, the cheese was a bright orange tasteless goo-fest, and the eggs I couldn't taste at all. 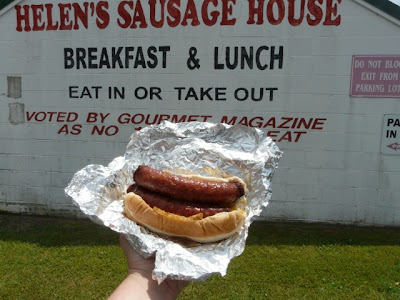 If you're looking for cheap roadside food, this is your place. It just wasn't my thing. But, when you're traveling some things are about the experience. This is one of them.

I guess I'm spoiled. I get bread, eggs, sausage and cheese back home from farmers less than five miles away with no fillers and no preservatives, no crap.  Just good old fashioned unadulterated food.

Posted by Unknown at 9:18 PM No comments: 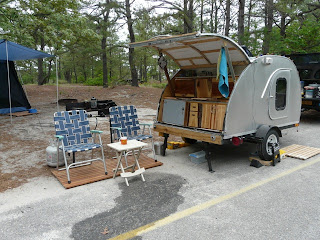 Our site and Cape Henlopen.
Posted by Unknown at 12:51 PM No comments: 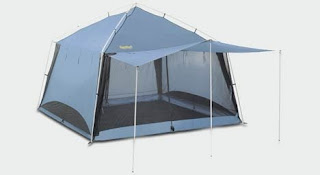 -Leah
Posted by Unknown at 9:56 AM No comments:

When you spend a month in a 40 square foot space, you take notice of things that could make things easier.

Small things, from having dedicated shelves for plates, to more complex things, like making a dog sleeping area on the trailer tongue, are constantly bouncing around in my overactive brain.

It's winter and cold, so I'll start with smaller, less time consuming upgrades.

Packing takes a few hours, so anything that can make packing a quicker process I am all over. When packing the Teardrop you have to consider possible breakage. Things can't be haphazardly stuffed in, glass can't be against glass, nothing can be loose, everything basically has to be tied down and tied in.

My first modifications I dedicate to Amelia Sauter, packing Queen. They will be three dedicated shelves; one for plates, one for bowls, and one for food. Right now the galley has no shelves, just three doors concealing three wide open areas.

One of the many mantras of working with small spaces - optimize vertical space, go up. Even on the tiniest of levels like a Teardrop trailer, there's more storage to be mined out.

This is my mission, and I choose to accept it.

-Leah
Posted by Unknown at 9:30 PM No comments:

First trip of the year

I wish I could say it's been a long winter, but it hasn't been. We didn't really have winter. In fact, we hardly burned any wood this year, less than a cord. Pretty amazing, and pretty disturbing. The snow we finally got was in April, and it did a number on all early blooming trees and shrubs.

I could roll right into glooming and dooming about the world, but that's not what this blog is about...

We're planning our first trip of the year, and decided to go back to Cape Henlopen in Delaware. We're going a few weeks later than we did last year, so we're hoping for no stupid people antics.

Unfortunately, we must prepare for the worst because the campground had limited sites available.   -le sigh-

Hey, you never know, we have had great luck with quiet neighbors for the most part.

The next three days will be spent inspecting, improving and packing up the Teardrop for the adventure.

I'm really looking forward to unplugging for a few days.

-Leah
Posted by Unknown at 9:29 PM No comments: