Wow, this is place was amazing. 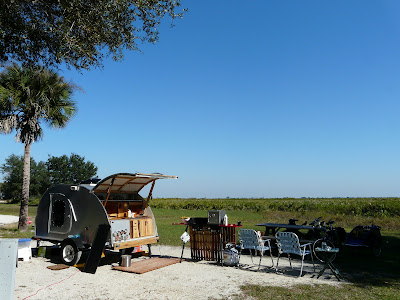 Coming from the hustle and bustle of St. Augustine to stillness and silence was perfection. It was surreal.  We drove thirty miles down small roads into nothingness, through a place called Yeehaw Junction.  I admit it, we were a little nervous about our destination.

Good signs kept popping up though:  A mature Bald Eagle perched on a tree, a Red Shouldered Hawk, a Prairie Falcon, and flat, lush green prairie on all four sides dotted with cattle ranches.  Where the hell were we going?

The campground was six miles down a shell packed road. We pulled in and were immediately greeted by the campground host.  Another good sign, a host that’s actually a real host, and greets you.  The campground was small, only twenty sites and fifteen equestrian sites. Oh, the good signs just kept piling up.

Once again, we were the youngest people in the campground. These were my people. I don’t care what age you are, or your background.  If you’re birding, or staring up at the night sky, you are most definitely part of my tribe: the Geeks.

We were the loudest people in the campground. And by loud, I mean shaking a martini. Yeah, it was that quiet. The people were serious about where they were. They were out birding, or sitting quietly, or reading a book. They picked up after their dogs, which were well-trained dogs. They were in bed by eight. They were sitting by campfires talking in near whispers.  They weren’t listening to radios.

This is place is so far away from anything that it really weeds out the - how shall I say?  The inconsiderate jerks?  You’re forty minutes away from any store, so you better pack in what you need. But, quite frankly, why would you want to leave?