You Can Check Out Any Time You Like, But You Can Never Leave 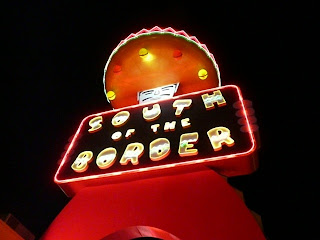 We packed up and left St. Augustine and got on the road by 1:00 in the afternoon. About nine hours later, what do we see???

Why, it's the creepy little South of the Border shimmering in all its late night neon glory! One thing was for sure, I had to stop here just take some pictures of all these ridiculously fantastic neon lights.

Hotel California should blaring over a loudspeaker system 24/7 here, because, well, it kinda feels like it. At 11:00 at night this place is Creepfest 9000. The number of shadowy characters lurking around in the dark was a little unnerving. But, it was dark, maybe those shadows were happy, fun-loving people, right?

There was nothing on the map for the next 60 miles, so we ended up camping there on a chilly 28 degree night.

When we checked in, there was a big sign at the front desk, it read - "Residents of the following counties are banned from this motel." Four neighboring counties were listed. Amelia asked why and the woman said one word, "Locals".

I slept with one eye open all night, half expecting a monster truck to run us over.

Afterthoughts: This could be the ultimate in kitschy, classic Americana-type mini amusement parks. It was actually sad to see it in in its current state. There is potential for something really fun here, but something is gone and missing. I think it's heart.

But, that's me, I see the potential of things. There is ALWAYS potential for something better.
Posted by Unknown at 10:11 AM